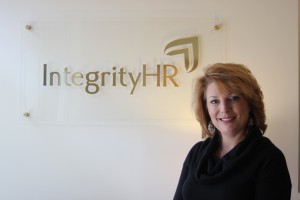 If Amy Newbanks Letke had her own reality show, it would be called “Say Yes to the Success” in human resources.

She’s made a career of saying “yes” to opportunities that have presented themselves in her respective field, including a decision to become an entrepreneur. In 2007, she founded IntegrityHR, Inc., a Louisville-based human resources consulting and outsourcing firm for small to medium-sized businesses. Since then, it’s grown to 11 employees offering a range of human resource services to clients around the country.

Her business motto is rooted in the same affirmative approach that motivates her. She wants to help other business leaders say ‘yes,’ too, and also “share, in a positive way, the consequences,” she said.

Like all good success stories, hers has had its challenges and opportunities born of adversity.

She wasn’t even sure at the start of her career if human resources was right for her.

“I was one of those people in college who hated HR. They were the people who always said ‘no,’ and didn’t call you back about jobs,” she said.
“I didn’t really have a great picture of what HR was all about.”

But, fresh out of college, she needed to move off her friend’s couch, and into a steady gig. She had good typing skills, which led her to a temp agency. It referred her to a fulltime job in human resources at Delta Faucet in Indianapolis. There, she learned the ropes. She was exposed to everything from executive alcoholism to union avoidance techniques, she said.

From there, she took human resources jobs at other companies, rising in rank and responsibility, gaining experience in a variety of industries.

She landed happily as the vice president of human resources at Applied Systems, the largest software company in Chicago at the time, where she lead strategic planning, processes for rewarding successful employees, and other initiatives she enjoyed.

She and her husband also invested in nine grocery stores in Chicago. She then left her job to manage human resources there. Then, one day, Frito Lay unexpectedly appeared at her door saying their stores owed them $2.5 million dollars. It was only the tip of the ice burg. Her business partners had been embezzling millions from the stores, which were forced to declare bankruptcy. Her partners were later indicted.

“It was the hardest time in my life” she said. “I never thought bankruptcy was something that would happen to me.”

With no money or clear direction, she moved with her two children to Louisville, where she had grown up and could rely on the help of family and friends to make a fresh start. “It was my survivor period,” she said.

After networking heavily in town, Letke joined Thompson Associates in 2003 to help Donald Thompson, then company owner, start an HR consulting practice. The subsidiary, Thompson HR Consulting, “held its own in the Louisville marketplace,” according to Business First, with about 25 clients and $200,000 in revenue for its 2007 fiscal year.

IntegrityHR can provide human resource management for small and medium-size companies at half the cost of a professional, in-house staff, she said.

“It’s a really good way for them to meet the needs of their businesses,” Letke said.

All her employees have the best industry certification and experience, Letke said, and they offer their clients and others free classes on trendy HR topics. Her team is developing a new software product that will make managing a company’s HR information, like new hires, policy review and training, much easier.

“It’s a gift,” she said, of the company’s success in Louisville. “I’m so grateful this market embraced what we do and has allowed us to make a difference in small and medium-size companies.”

She said she’s gotten some help along the way that’s made a big difference. For example, she participated in Louisville Score, which pairs business mentors with burgeoning business leaders, and the local chapter of the National Association for Women Business Owners. She was also on a Greater Louisville Inc. CEO roundtable, where she said she was surrounded by great people, who could give advice on struggles they had already overcome in the development of their own businesses.

Her advice for new entrepreneurs is to:

Follow your passion, really want to do what you do, and create an actionable plan on how to achieve that passion.

“I feel strongly about goal-setting,” she said. “Everyone should have more goals, personally and professionally. Be purposeful and understand why you’re doing what you’re doing. Then think about how you’re going to measure success. If you write those measures down, you’ll hit your targets.”